Home » Dog Training » How to Crate Train a Husky Puppy

How to Crate Train a Husky Puppy 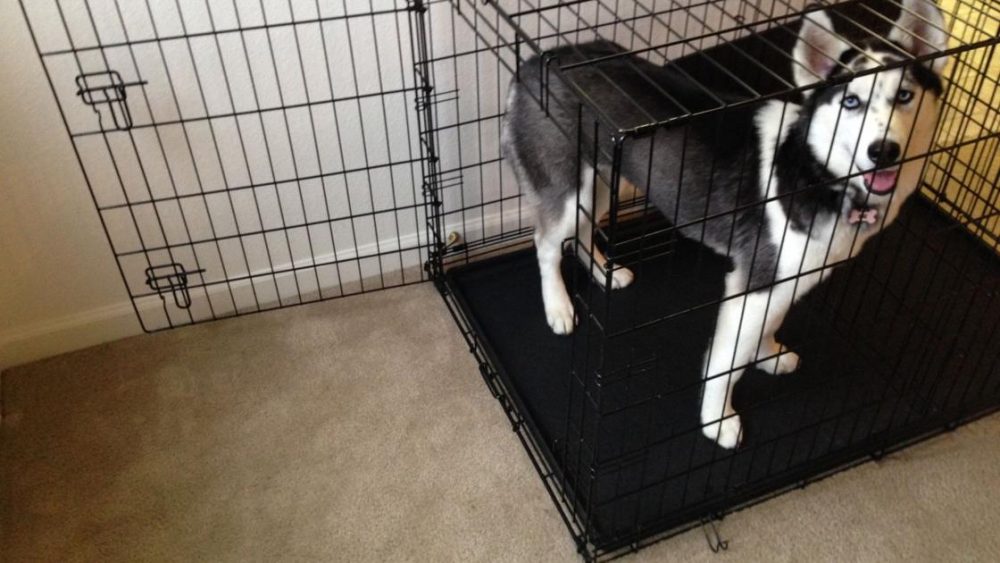 Crate Training is excellent for Huskies. It’ll help control their destructive behavior and control them and make them a well-behaved pet all around.

Training them while they’re puppies is much easier than training a grown Husky, so it’s better to start the dog training while they’re younger. This’ll also help him recognize the crate as his personal space.

But The Question is, How To Train Them?

To find out, Continue Reading…

Why Should You Crate Train, Your Husky?

Crate training a Husky has a lot of reasons.

But one thing is certain; Crate training is perfect for both you and your dog because:

Crate training will help your Dog to reduce behavior problems like barking and digging because they are spending less time being alone outside and spending more time with you and your family inside.

So now you might have a clear idea of why you should crate train your Husky or any dog for that matter.

When Should You Start Crate Training Your Husky?

As I said before, it’ll be easier for you to start the dog training while he’s a puppy. Training after he’s a bit older can be so much harder. Typically a 3 to 4 months old puppy can easily recognize the crate as his home. However, you can start training him earlier than that.

If you bought the puppy from a breeder, they might know the restriction and will adapt quickly inside the crate, but if it is a rescue dog, you might want to struggle a little bit more because they might have some other problems that should be addressed first.

So if you’re crate training a rescued puppy, make sure to address his prior behaviors first.

Choosing A Crate For Your Husky

It is essential that you find a crate that perfectly fits your puppy without having to put him into a problem with a lack of space for them to move around and without making your Husky feel trapped.

So before buying a crate, make sure to follow these factors for a perfect and cozy crate or check out Barkforce’s dog crate sizing guide:

If your Husky is a Male, then the perfect crate size for him would be 42 x 28 x 30 inches. For a Female Husky, Going with a 36 inches long crate would be ideal.

Also, avoid buying crates that are significantly larger than your Dog; it may not work out well because a supersize crate will make your Husky to toilet on one end and sleep at the other end.

Things You Should Do Before Training

Before you go on and train your Husky, there are some things that you need to address first.

Placing the crate in the correct place plays a big part in crate training your Husky.

Place it where the majority of the people in the house spend their time; this doesn’t make him feel that he is being isolated or abandoned.

If it’s at night, the only place your Husky will feel better is with you, so place him inside your bedroom beside your bed. That way, it’ll be great for your pup.

Also, you can place him in a quiet spot, wherever you put your Dog in; if he’s still a puppy, you should be able to hear him, especially if he’s still potty training.

Customizing The Crate For A Comfortable Place

You will want to make the crate much more comfortable and make it more appealing for your Husky.

You can do this by placing a soft clean blanket inside the crate for them to lie down comfortably; for entertainment, you can place his favorite toy and chew bones so that he can happily play with it once you’re away.

Now that you’ve found a suitable for the crate and made it comfortable so now it’s time to start crate training your Husky.

Make sure to follow the steps below thoroughly and slowly and do not try to hurry up the process in order to complete the training; you would end up making mistakes, so stick to the process.

Introducing The Crate To Your Husky

Once you’ve placed the crate in the desired place, you can now start to bring your Husky’s attention to the crate to do so. Here are some steps you can follow.

First, you have to open the door or doors (if you’ve opted for a two-door option) of your crate; make sure you keep the door open as much as it can. This will help him get inside safely without getting hit by the doors, which might make him afraid and even lead to injury.

Do not urge him to get inside, first let him get familiarized with the crate and once your Husky gets near the crate and interacts with it, start using the word “CRATE,” do this for a few minutes.

Getting Your Husky Inside The Crate

After he gets inside and stays in for a few minutes, without closing the crate door, reward him with some treats and praise him for going inside, continue this process a few times.

Now that your Husky’s spending some time in his crate, it’s time to close the crate door while he’s inside.

You can also do this process while he’s eating his meals inside the crate or sleeping.

If the Dog does not go on and eat while kept that far, then take the food to the entrance of the crate and keep it there and gradually increase the distance throughout the process.

After the Dog starts to eat his meals inside the crate, you can keep the door closed until he finishes his meal.

And once done, you can open; each time you do this, gradually increase the waiting time for your Husky inside the crate after he completes his meal.

Make sure your pup gets used to this process before you go into the next one.

Leaving The Dog While He’s Inside The Crate

By now, your Husky should’ve somewhat gotten used to being inside the crate. Now it’s time for you to step away from the crate gently.

Move away from the crate and return after a few minutes. If the Dog’s doing alright, then reward him with treats and open the crate for him to get out. After a few minutes, repeat the process once again, and this time you leave him inside the crate, gradually increase the time you return and work your way up to 30 minutes if achieved. You can start to leave your Husky alone.

Avoid Keeping your Husky in the crate for much longer. It’ll make him anxious. Always let him out of the crate after you return and reward him with treats.

Follow each of these steps every time until your Dog is completely fine while being inside the crate with no sign of anxiety and fear.

The time that it will take to complete this training depends solely on You and Your Dog’s effort, so be consistent and repeat the process frequently.

How Long Can You Leave A Husky In The Crate?

As I said before, you should avoid leaving your Husky inside the crate for a more extended period.

Leaving them inside for too long can make them feel abandoned, frustrated, and trapped.

So for how long should a dog be crated?

Typically a Dog can’t be left inside the crate for not more than 5hrs. For puppies that are below 6 months, they should be left in for 4hrs not more than that, because it’ll be hard for them to control their bowel periods for long.

Crating Your Husky at Night

By now, your Husky would be pretty much fine while he’s left alone, and now it’s time to make him spend his night there.

Put your puppy into your crate by the time you go to sleep, but before doing so, you can have a session of exercise and take your Husky for a potty break. This’ll help reduce your puppy whining at night. And also prevent potty accidents from happening inside the crate.

Placing the crate inside your bedroom will help your puppy sleep well, and especially you will be able to hear him if he whines to go for a potty break.

You can also move the crate to another place after your puppy falls asleep.

What Should You Do If Your Husky Is Crying And Whining In The Crate?

There are a few reasons for your puppy to whine at night, but it might be hard to figure out what exactly it is.

If this is the case, then ignore him while he is whining, and return to him after he stops it.

Never rush to your Dog whenever he cries because this’ll only make the situation worse because he’ll always continue to do this in order to achieve his needs.

So you need to teach that whining cannot solve his need.

Crate training can be fun and, at the same time, can be time-consuming, but if you’re in the process, you should be consistent.

Always practice the process until your Husky happily accepts to be inside the crate.

Never force your Dog to get inside a crate or leave him for a longer period of time.

Be patient and successfully continue the training and complete it. 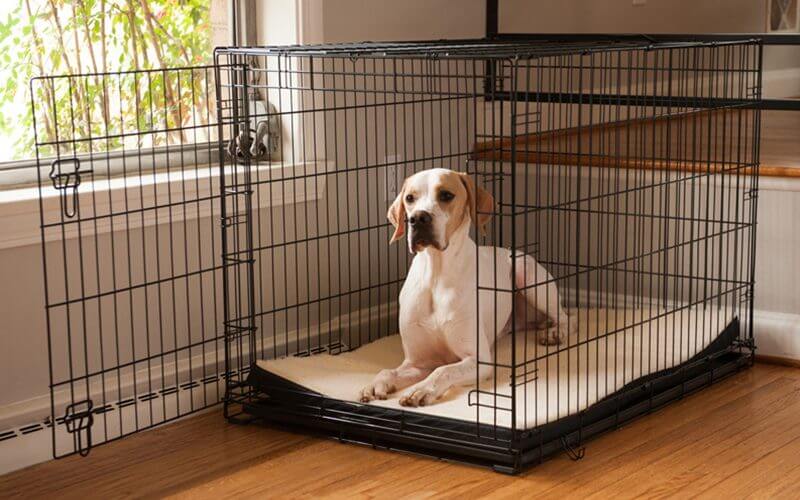 How To Find The Right Size Dog Crate For My Pup?

Are you in the market for a new dog crate, but uncertain about what size… 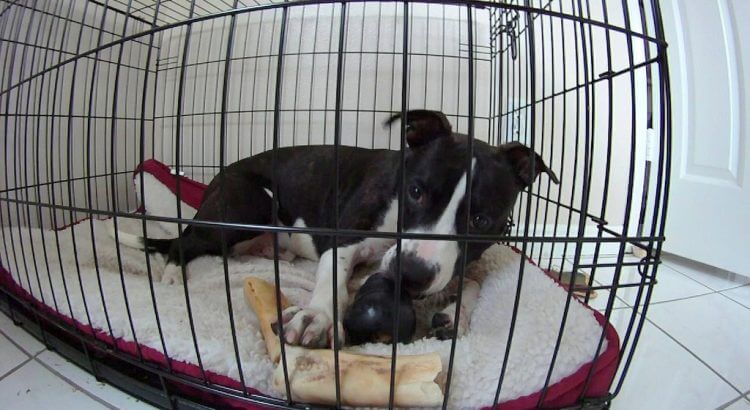 How Big of a Crate Does My Dog Need?