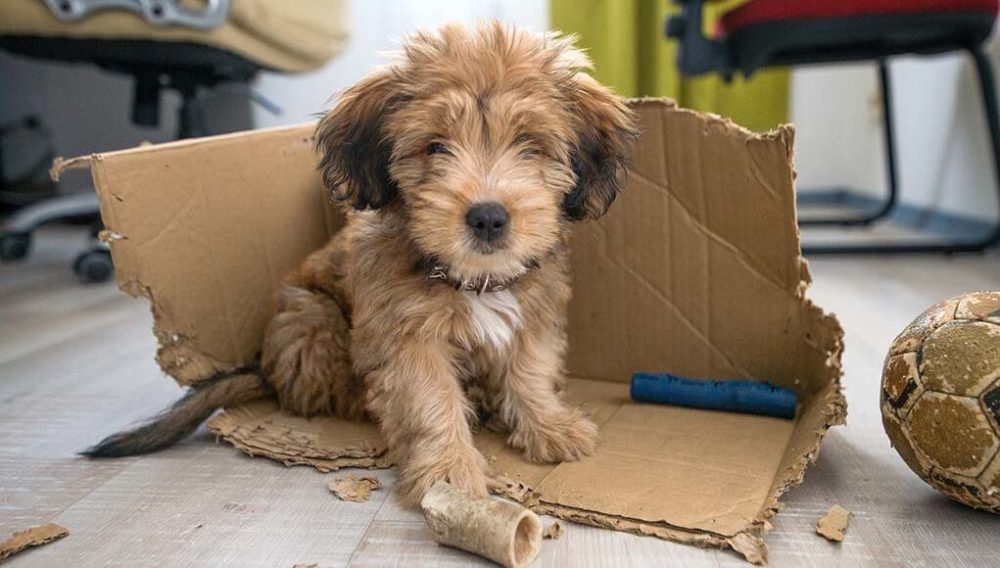 Owing to the humongous number of myths on dogs and their behavior, owners tend to misinterpret them. However, if you are a dedicated dog parent, you should avoid misreading these signs. Remember, paying attention to the activities of your dogs is the only way that you would be able to understand its indications. Here are some of the most common dog behaviors which owners misinterpret.

Suppose it’s a bright sunny day and you have taken your dog for a walk where he wags his tail on meeting a close relative of yours that he knows might of course mean he is excited! However, contrary to popular belief, dogs wagging their tails might not always mean that he is happy or friendly. A dog wagging its tail could indicate different things based on different contexts.

2. Dogs bark when they are aggressive or anxious

That is again a myth! Like you react to different situations, your dog does too. As a result, barking does not indicate any specific feeling in your dog. Rather your dog can bark both when it is aggressive or when it is excited and you have to understand and differentiate their barks in order to understand their message. A shrill bark might often signify that your dog is anxious or afraid. On the other hand, a dense or warmer sound of your dog’s mark might indicate that he is looking for your attention.

Digging habits of dogs are often misinterpreted for indications of anxiety. However, this could mean several things. Most studies reveal that digging is an instinct of dogs which is a trait present in most breeds.

Dogs tend to hide their precious items like their old toys by digging any barren land that they get. You would also find your dog digging your lawn or even a sofa at times and it does not indicate much! If your dog is anxious, he will show other signs. Digging is also a common trait amongst the hunter dogs like terriers. Dogs also tend to mark their territories through this activity.

This is one of the most embarrassing activities of dogs for their owners. Suppose you are hosting a party and your dog starts to hump a cushion or a pillow. While this is often mistaken as an activity which indicates sexual arousal, it is far from reality.

Dogs hump as a general sign of happiness or excitement or even when they are sexually aroused and not just the latter. Thus, you would see dogs humping other dogs even at a park or when they are cheerful. Most of the time it has got nothing to do with sexual arousal or anything similar and you need not be embarrassed!

Chewing, as with every other animal is only an essential activity for dogs. However, the way the dog chews can be indicative of a number of traits. It might be indicative of excess monotony or excessive energy when the dog is restless. It might also mean that the dog is anxious or confused regarding something.

But incessant and abrupt chewing in puppies is often associated with curiosity. This should be fed by allowing the puppy to chew appropriate stuff like food or such toys. When one is not at home, such puppies should be confined to safe spaces.

While you misread your pet’s behavior, both of you can land in trouble by misreading some of the signs. You should never try to understand signs of illness or recovery in your dog, rather you should straightaway take him to a vet if you feel he is not as cheerful or active as before. You should also get your pet insured so that you get financial coverage in case of any serious physical ailment of your doggo. There are a number of insurers that pet-owners tend to opt for, however, Lemonade Pet Insurance is the most popular.

7. Begging as an inappropriate behavior

It is often seen that dogs come to owners or even strangers with a very hapless look in their eyes which makes one pity on and love them. However, such begging when it comes to food should be absolutely discouraged, because food is not loved.

Begging for table scraps is a bad habit which if not corrected sets it permanently. Moreover, if the owner does not check, constant begging for food may lead to troubles in the digestive tract and even cause obesity. So, one often misunderstands the looks of dogs which surely melts one’s heart but the practice of “this is the last time I’m giving you”, causes only further damage. The behavior is inappropriate unless the dog is underfed and should be stopped.

No matter how lovable dogs are, urination and defecation at inappropriate places and times can be very upsetting. They can apparently damage spots and mark an unwelcoming behavior but it might have other undertones, especially if they are young, that is they can control their discharge like older dogs.

You should see a vet to check if it is due to health-related issues. If not, then it might indicate excitement, fear, or most importantly marking of an individual territory.

9. Chasing as a dangerous trait

Dogs who chase people or other animals is a dangerous behavior as it enhances aggression. It might be dangerous for anything or anyone like a jogger whose movement might trigger the dog to chase and then pounce upon the person meeting with a bloody accident. It might originate solely due to an instinct of predation. Most often, dogs chase to gather food.

But, in the process of misconceiving the prey, they might chase more dangerous animals, humans, cars, or other moving objects which might end up in quite a disaster. It is almost impossible to stop a dog’s chasing but it can be reasonably controlled by proper training or using a leash except when absolutely safe in the confines of the owner’s indoors.

10. Jumping as a move of affection

Jumping is one of the most intrinsic behaviors that can be attributed to dogs. It is mostly a show of love, care and affection. Puppies jump to be embraced on catching sight of their mothers. Similarly, pet dogs jump while seeing the owner after a while of absence in order to be patted on or fondled with. It is a show of demanding love. It might also be a cordial gesture as dogs often jump to greet people.

However, it also has to be kept in mind that jumping can also be linked with over excitement and aggression like when a dog wants to snatch away something from the owner’s hands which it is forbidden to do. So, a jumping dog can be threatening or pose danger too.

11. Biting/ Nipping as an act of exploration

Among puppies nipping or biting almost everything is a very common observation, from food to clothing,- anything and everything. This primarily occurs because a puppy is essentially new to the environment and knows nothing. Biting enables it to either taste the substance or feel it. So, it is how they explore their immediate surroundings.

But nipping at inappropriate objects or biting too hard might be dangerous for the puppy itself. So mothers teach their pups against this practice and owners should also imbibe bite inhibition in their pet young dogs.

Dog behaviors can be both highly indicative or not and depend on your observations. For instance, if you pay close attention to how it wags its tail in different situations, or how it barks, you would be able to differentiate these behaviors and avoid misinterpreting them.