10 Human Foods to Avoid for Pets 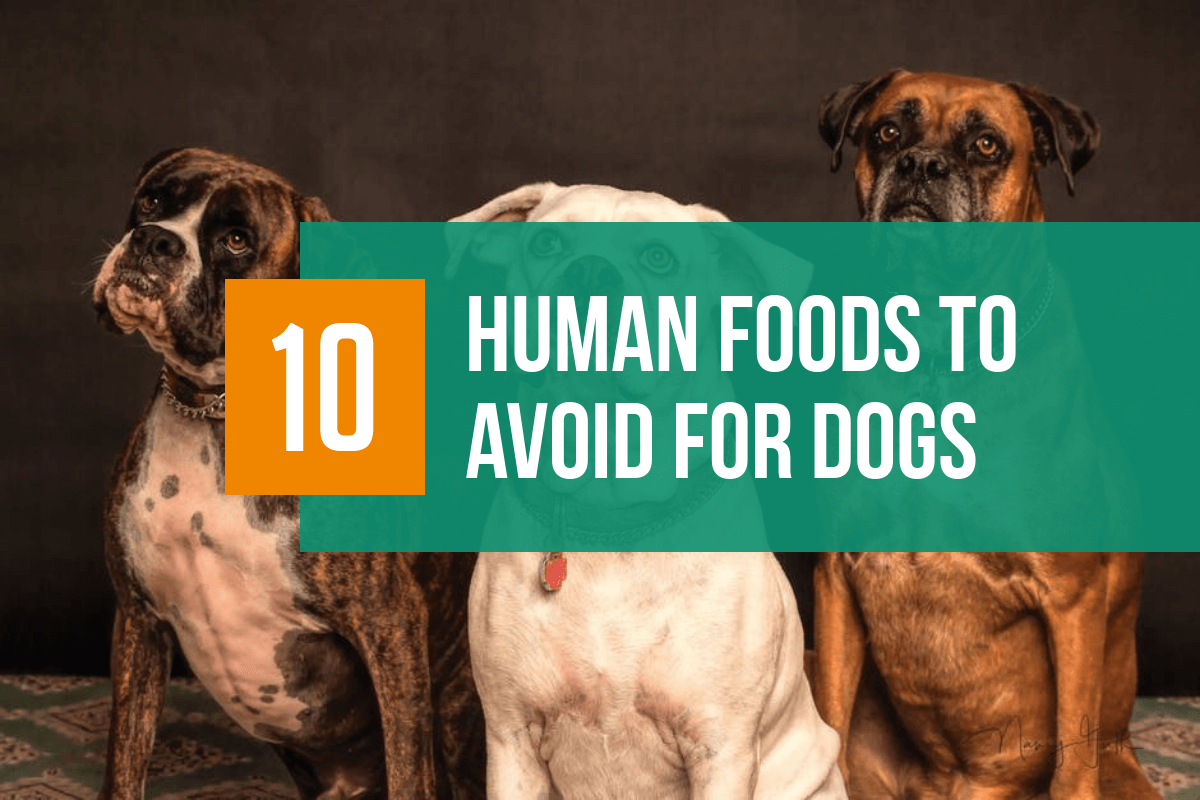 Dogs are one of the first pets known to man. For centuries canine’s have been tamed by man for various purposes like herding, hunting, etc. The anatomical structure of a man and a dog is not the same. They have different hormones with varied concentrations, over or under secretion of certain enzymes, concentrated digestive juices, etc. The hormones help in quick digestion of raw foods and dog foods in particular. Moreover, they do not have problems with cholesterol and colon cancer like humans. At the same time, they may get different diseases like distemper which would not affect man. Like the digestive system, their behavior, senses, thought everything would change concerning the human.

However, it’s to be noted that human food should not be given to dogs, as they possess a distinctive digestive system comparing to man. Not all the human food will get digested by a dog. There are specific foods which will spoil the health of a dog, which can sometimes be fatal. I always provide food to my dogs using a pet food dispenser and none of it are human food. I only give them what is meant for a dog to consume. So, proper advice and consultation from an experienced vet will help you to gain knowledge about the food given to your dog. Here’s a list of human foods that pets need to avoid:

Alcohol is one of the worst things which when ingested to a dog will cause serious health problems. Human kidneys can filter the ethanol toxicity in the liquor from the blood even if the function of the kidneys would become improper eventually. Moreover, alcohol can cause severe damage to human liver also. But the kidneys of the dogs are not meant to filter any sort of liquor leaving the alcohol in its blood itself. It would also result in lack of consciousness, low heart rate, damage to body cells, heart attack, etc.

Avocado is a fruit which is very rich in proteins, and also they are good for skin, eyes, and liver. It also helps in getting rid of cardiovascular diseases, sleeping sickness, nausea, etc. But it is suitable only for humans whereas in case of dogs these fruits seem to be toxic. The toxin in the avocado fruit called persin is the main reason for its toxicity. Not all the avocados contain persin, and so only a certain species of avocados are toxic to dogs. But, all avocados are toxic for birds and cattle.

As we know coffee beans contain a substance called caffeine. These are not good even for human health and imagine what it would do to the dogs? Moreover, chocolates and coffee contain another substance called methylxanthines which would cause serious illness to dogs. Dark chocolates prove to be more dangerous than the milky chocolates as the dark chocolate contains more methylxanthines which would cause excessive thirst and urination, vomiting, diarrhea and finally lead to death.

Most bread is made with the help of yeasts. It’s a fungus which breaks the sugar into carbon dioxide and ethanol under warm environment and absence of air. When a dog consumes a small amount of dough, it enters the stomach where the dough has the same conditions of absence of air with the warm environment very much like a microwave oven. The dough starts to rise due to the carbon dioxide, and the ethanol is formed. This carbon dioxide increases the volume of the stomach causing gastrointestinal problems, and the ethanol creates toxicity thus leading to loss of coordination, depression, and behavioral changes.

Grapes and resins are very good for human health but it’s toxic to dogs. When accidentally consumed by a dog, it causes acute and sudden renal failure, which could be fatal. A dog who has consumed a grape or resin will have an absence or decrease in urination, lethargy, tiredness and tremors. If you notice any problems with your dog’s kidneys take them to a vet immediately. An apomorphine shot will be administered to force your dog to vomit.

Milk is good for human health but it will create health issues for your pet. Milk contains a sugar called lactose and digestion of this sugar needs an enzyme called lactase which is present in most humans. However, adult dogs contain very little lactose and they are highly intolerant towards milk and dairy products which causes loose stools, gas, diarrhea and pain. Puppies, on the other hand, have a higher tolerance towards lactose in order to digest their mother’s milk. The lactose tolerance varies with respect to the species of dogs. Some may be extremely tolerant and some may not.

Onion would not only make a human; it can also make a dog cry but for a different reason. Onions contain ingredients like allicin and thiosulphate. The allicin in the onion is responsible for making us cry. When a dog consumes an onion, the thiosulphate in it will enter a dog’s bloodstream causing the red blood cells to burst. So, the oxygen-carrying capacity of the blood would decline drastically. This condition is termed as hemolytic anemia and the affected pet shows lethargy, pale gums, decreased appetite, fainting and reddish urine.

As we know, salt is a natural substance that causes excessive thirst. Is seawater healthy to drink? No isn’t it! Overconsumption of salt content causes renal dysfunction in humans which leads to kidney failure. Similarly, salty foods will increase a dog’s thirst level. It’s crucial to stop feeding your pet potato chips, pretzels, cookies, etc. which will cause depression, diarrhea, tremors, dehydration and much worse.

Chewing gum and candies are sweet, but do you think sugar is used in these as a sweetener? No. Artificial sweeteners called xylitol is used as the sweeteners in chewing gum, candies, toothpaste and much more. When ingested by your dog it causes an insulin surge in their pancreas. This reduces blood sugar to an extreme low which zaps all of the dog’s energy causing weakness, vomiting, non-coordination and coma. It’s not only xylitol, there are additional ingredients such as dulcin and saccharine that can make a dog ill.

When dogs have a cough, fever or a headache, some people tend to give human medicine to dogs. It’s to be noted that just because the problem is the similar, treatment isn’t the same for both. Human medicines contain many ingredients which are totally harmful to your pets. Ingredients like acetaminophen, ibuprofen, and aspirin are used for to treat people but are fatal to your dogs. So, make sure that you DO NOT give your dog medicine which would aggravate the health issue.